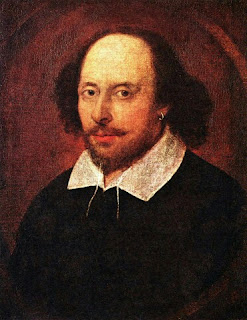 William Shakespeare, The Comedy of Errors

You may recall that around this time each year I get together with the "Obscure Shakespeare Play Reading Group," consisting of a few former A.P. students of mine who are now out of college, pursuing their careers, and who simply want to gather for a lunch at a Brookfield pub, catch up on what's new in our lives, and chat about -- among various other things -- a Shakespeare play that few people ever read. In the past, we've discussed Coriolanus, The Two Noble Kinsmen, King John, and one year even branched out to read Dante's entire Divina Commedia. For this time around, we chose a play that I've read before, but one that was fun to re-visit: The Comedy of Errors.

The play itself is amusing from sort of a Three's Company point-of-view -- mistaken identities, bawdy humour related to the anatomy, slapstick, etc. There's nothing terribly cerebral about this particular play, which is based on a comedy by the Roman playwright Plautus entitled The Brothers Menaechmus. Two sets of identical twins, each of a different social class, get mistaken for each other ... and chaos ensues! This is one of the earliest examples of Shakespeare's uncanny ability to take basic source material (i.e., the Plautus play) and make a silk purse of a sow's ear. He adds minor characters, plot twists, puns and wordplay galore, all the while maintaining the three Unities of Time, Place, and Action as a reverent nod to the ancients. An obscure play by Will, certainly, but hardly an inferior work.

As always, it will be a pleasure to see Al (cinephile extraordinaire who runs an English Department for a school within the CPS system), Mike (the mad Bohemian who travels cross-country Kerouacstyle and who, I learned, broke a finger recently ... gotta hear that story), and Ben (glorious jazzpunkman of academia who has lived and studied in China for the past year and a half)!

An impressive group, to which newcomers are always cordially welcomed. : )
Posted by Tim Strzechowski at 11:08 PM