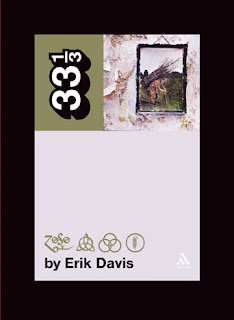 This is now the second book I've read that examines Zep's "four symbols" album, and in many ways this one is more enjoyable. Focusing specifically on an analysis of the songs in terms of their lyrics and arrangements, Davis enhances the impact of his analysis by relating the music to Led Zeppelin's place within 1970s rock as well as their supposed dabblings in the occult. Further, by identifying a persona within Plant's lyrics whom we can follow from song to song (a persona Davis names "Percy," Robert Plant's nickname), the author demonstrates (with varying degrees of persuasion) the physical and spiritual movement that takes the listener from the opening accapella verse of "Black Dog" to the concluding chords of "When The Levee Breaks."

One of Davis's early discussions in the book, however, addresses the modern movement toward digital music, which has been the death knell for the physicality of vinyl albums. Hence, the ways in which a listener approaches the sequencing of the music, not to mention the album art, the inner fold of the album design, and the sleeve of lyrics, are all examined and celebrated by Davis for their contributions to the overall mystique of this musical masterpiece.

And Davis devotes moments to the ephemera of the album as well: the ten-second odd musical strains that immediately preceed "Black Dog"; the sorts of "messages" that you hear when playing "Stairway to Heaven" backward; the use of Sandy Denny as backup vocalist on "The Battle For Evermore" and the band's nods to Joni Mitchell and Memphis Minnie throughout the album; "Rock and Roll" as punk Zeppelin, and the experimental nature of the performance and mix of "Four Sticks." And while Davis occasionally veers into the downright obscure when analyzing the songs (e.g., his examination of "Stairway To Heaven" is itself a 35-page piece of rock scholarship), his writing is always engaging.

This was a fun chance to re-visit -- again -- one of the greatest albums from the days of my youth.
Posted by Tim Strzechowski at 4:35 PM