Charles Dickens, Little Dorrit
Of all the Dickens novels I've read thus far (and I've now read twelve of 'em), this was, without a doubt, the roughest one to get through. Maybe it was the timing: I had just finished teaching a ten-week course on David Copperfield and Bleak House -- which is the equivalent of eating a seven-course meal at a German shmorgasbord -- and I was either too Boz'ed out to attempt another one of his 900-page tomes, or I was still reeling from the sublimity of Copperfield and Bleak. Regardless, I spent a good three months pluggin' away at this bugger, and I found Little Dorrit extremely difficult to get into, let alone enjoy at any level whatsoever.
The title character is the daughter of William Dorrit, an insolvent who has been long imprisoned in the Marshalsea for debts unpaid. His daughter Amy is born and raised within the confines of the prison, and the first half of the novel focuses on numerous characters as their trajectories weave in and out of that of Dorrit, the "Father of the Marshalsea." Due to a mysterious and coincidental stroke of fortune, Dorrit falls into wealth ... and the second half of the novel follows the same peripheral characters as they move in and out of Dorrit's newfound circumstances outside the walls of the debtors' prison.
In a way, Dickens is at his subtlest here, working with a fairly simple theme -- imprisonment -- but exploring carefully the nuances of that theme as they affect the lives of the wealthy, the destitute, the young and old, the villainous and innocent. Unfortunately (for me, at least), I found few characters who were likeable (except for the one everyone seems to delight in, Flora Finching), I thought the plot was too plodding and convoluted, and there were far too many instances of Dickens "telling" us what to think rather than "showing" us -- as if, late in his literary career, he had developed the neophyte's habit of beating the reader over the head with his social commentary.
In Dickens's defense, I also get the disinct impression that I simply didn't give this book a fair shake ... that for whatever reason I just wasn't ready to read this novel and gluttonously forced it down before I'd let the previous two digest properly. Now I'm suffering for it in the bathroom. Make of that metaphor what you will ...
Posted by Tim Strzechowski at 2:12 PM No comments: 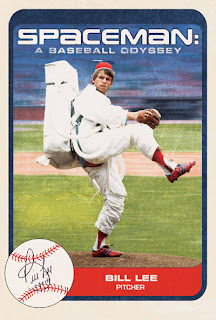 Bill "Spaceman" Lee and Jim Prime, Baseball Eccentrics
As those who know me know, we're a baseball-lovin' family here, we are. So it was completely in-character for my wife to get me the Spaceman's Baseball Eccentrics as a Father's Day gift. I read the whole thing in about one day!
Baseball is a sport that lends itself beautifully to storytelling, and here the wacky Lee doesn't disappoint! Focusing on the various "flakes" and eccentrics who have populated baseball over the decades, Lee provides generous helpings of old standards like Casey Stengel, Yogi Berra, Leo Durocher, and my personal fave: Mark "The Bird" Fidrych (I can still remember my father laughing at the TV when I was a kid back in 1976, watching Fidrych "talk" to the baseball!). But Lee also describes the eccentricities of more revered players (e.g., Satchel Paige, Barry Zito), players who delighted in practical jokes (Moe Drabowsky, Jay Johnstone), those who observed strange superstitions (like Kevin Rhomberg who, during his three years with the Cleveland Indians back in the early Eighties, superstitiously believed that every time he was touched by another human being, he had to touch that person back -- often with hilarious results!), and a wide variety of jokesters, irate managers (Earl Weaver, anyone?) and, of course, Bob Uecher! And while some of the stories may be familiar to you, Lee maintains a nice, conversational style that enhances the witty storytelling.
This was pure, mindless entertainment. If you or a friend/family enjoy baseball lore, this is a fun book!
Posted by Tim Strzechowski at 11:36 PM No comments: 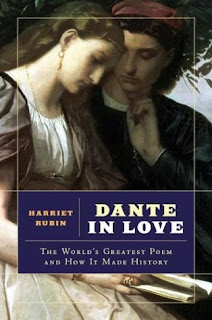 Harriet Rubin, Dante in Love: The World's Greatest Poem and How It Made History
This is a pretty good supplement to any reading of Dante, whether it be just reading Inferno or the entire Divina Commedia for the first time. While I'm not too crazy about the title (which suggests a focus on Italian poet Dante Alighieri's love for his Beatrice a la Shakespeare in Love), the scholarship is well done and, like the Peter Ackroyd biography of Shakespeare I read earlier, it provides an excellent portrait of the poet, his times, and his writing method.
Rubin begins by putting Dante within his political context, detailing the circumstances surrounding his exile and the nineteen years of wandering he was subjected to as a result. She adds to this a solid analysis of each of the Commedia's three canticles, discussing Dante's compositional methods and influences (whether real or literary), all the while linking Dante's development as poet and man to his developing sense of "love" -- love for Beatrice, love for country, and love for God. Ideally, I would have liked to read Inferno in its entirety, followed by Rubin's section on it; then read Purgatorio in its entirety, followed by Rubin; followed by Paradiso and Rubin. As I said, for students of Dante this is a good book ... maybe not the best, but a good starting point for putting the Commedia within some authorial and historical context.
If you have a chance, check it out.

Posted by Tim Strzechowski at 1:08 PM No comments:

The Literature of Hell
This summer, I'm teaching an eight-week seminar at the Newberry Library called "A Gathering of Shades: Exploring the Literature of Hell," a class I developed and taught there a few years ago based essentially on many of the literary works we read in A.P. English. In this seminar, we read exerpts from the Epic of Gilgamesh, the Book of Job, Homer's Odyssey (Book 11), Virgil's Aeneid (Book 6), and Books I and II of John Milton's Paradise Lost. In terms of complete texts, in the seminar we read Aristophanes's The Frogs, Dante's Inferno, Mary Wollstonecraft Shelley's Frankenstein, Samuel Taylor Coleridge's "The Rime of the Ancient Mariner," Jean-Paul Sartre's No Exit, Albert Camus's "The Myth of Sisyphus," and Samuel Beckett's Waiting For Godot. It's hell ... but it's fun stuff!
Over these next two and a half months, however, I have several books that I've collected over the years as desk references for a course such as this, and as I teach each weekly session these are the books I have open on my desk and find myself re-reading in snatches:
Alice K. Turner, The History of Hell -- This is an easy-to-read and entertaining survey of all things Hell-related throughout literature, and includes some fabulous photos and artwork to enhance the reader's understanding of how Hell is reflected in the arts (later chapters draw upon how film and music are influenced by literary visions of Hell).
Edward J. Ingebretsen, Maps of Heaven, Maps of Hell: Religious Terror as Memory from the Puritans to Stephen King -- Given the literary works I teach in the seminar, Ingebretsen's text is not really useful. But his discussions of early American "terror" and how it influenced the writings of Emerson, Hawthorne, Frost, H.P. Lovecraft, and Stephen King serve more as reference than anything. I think this book is currently out-of-print. I scored a copy at Powell's Books in Portland, Oregon!
I.P. Couliano, Out of This World: Otherworldly Journeys from Gilgamesh to Albert Einstein -- Another well-written survey text, it helps the reader understand aspects of the afterlife as they pertain to Buddhism, Judaism, and Shamanism. Very accessible!
Alan E. Bernstein, The Formation of Hell: Death and Retribution in the Ancient and Early Christian Worlds -- Probably the most comprehensive and scholarly of the texts here, its focus is limited to the eras mentioned in the title, but the depth of analysis is staggering! This was another gem I found at Powell's Books in Portland. I seem to remember its being hard to find elsewhere.
Ronnie H. Terpening, Charon and the Crossing: Ancient, Medieval, and Renaissance Transformations of a Myth -- This one was perhaps the most difficult to obtain. Its been in and out of print in the last few years, and appears to be the sort of text that is printed in limited editions solely for university library collections. The focus is on the ancient boatman who traverses a river to bring souls to the underworld - a myth that can be traced through numerous religions and takes on various forms. It's a fascinating study and definitely a book worth getting for the serious Hell scholar in your family.
Mary Roach, Spook: Science Tackles the Afterlife -- Roach is a wonderfully amusing writer whose examination of the uses for corpses in Stiff I mentioned some time ago on this blog. In Spook, she tackles various scientific methods that have been used throughout history in an attempt to "prove" the existence of the human soul and an afterlife ... and while I found this book somewhat less interesting than Stiff, her tongue-in-cheek humor keeps the whole thing moving nicely!

So if the study of Hell is your thing, you can do one of two things: spend a day at your local DMV or, better yet, check out these books!
And if you like Hell-related music, click here. Enjoy!
Posted by Tim Strzechowski at 11:51 PM No comments: 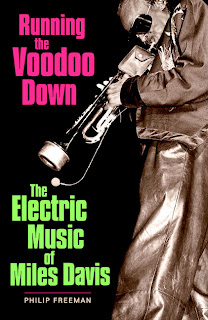 Philip Freeman, Running the Voodoo Down: The Electric Music of Miles Davis
While I lack the expertise and foundation in musical theory to fully understand when jazz critics discuss such things as time signatures and "polarity of rhythm" and "artificiality of methodology" and such abstractions, I knows what I likes when it comes to jazz ... and I've always liked Miles Davis. And the nice thing about Freeman's book is that he doesn't burden the reader with abstractions.
Focusing on Davis's fusion period from 1967 thru 1974, Freeman offers a series of extended essays that explore the various ways in which Miles stretched the boundaries of what was considered "acceptable" (or even listenable, for that matter) both within and without the jazz community. By experimenting with personnel lineups, drawing from such influences as Jimi Hendrix and Sly and the Family Stone in terms of sound and song structures, fostering oft times vitriolic relationships with fellow musicians and his producer, Teo Macero, and continually searching for new ways to push the limits of both the musician and the listener, Miles Davis was able to create a body of work within that short period that would immediately influence his peers within the jazz community (like Herbie Hancock or John McLaughlin) and artists within the prog rock community (Yes, King Crimson, etc.), and influence the likes of pop, rap, hip-hop, ambient, and rock artists in decades to come.
By the way, another book I've read that handles this era well is Paul Tingen's Miles Beyond: The Electric Explorations of Miles Davis, 1967 - 1991. Do check that one out as well.
Posted by Tim Strzechowski at 3:05 PM No comments: