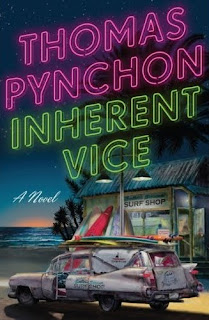 Set along the beachfronts of Los Angeles in 1969-70, our author gives us yet another Pynchonesque schlemiel, Larry "Doc" Sportello, a sandel-wearing private investigator cut from the familiar cloth of Tyrone Slothrop (Gravity's Rainbow), Oedipa Maas (The Crying of Lot 49), and Zoyd Wheeler (Vineland). Doc is confronted by old flame Shasta Fey Hepworth, who hires him to find her new lover, Mickey Wolfmann, who has recently disappeared. The ensuing investigation, which is a fun send-up of the traditional noir plot, sends Doc on a complex investigation that involves everything from Vegas lounges to port schooners to an underground organization (or is it?) called the Golden Fang. With its femme fatale, network of seedy minor characters, and seemingly endless smoking (tho what Doc smokes is a bit more ... um ... pungent), Pynchon channels Dashiell Hammett and Raymond Chandler brilliantly in this homage to all things noir!

And for Pynchon fans, all the usual images and motifs and themes are there: the wacky song lyrics; the silly names; the really, really bad puns and doper humor; green and magenta; lightbulbs; mayonnaise; photography and film; paranoia -- it's all there! This is a veritable treasure trove for fans of The Man's works. A-and what struck me most was how long it's taken an author, whose fiction typically centers around the investigation of a mystery wherein the investigation becomes more and more complex, to finally come around to writing a work of noir fiction!

Maybe that's what makes the book "work" so well ... Pynchon (and his characters) were made for noir fiction!

Groovy!
Posted by Tim Strzechowski at 9:48 PM No comments: 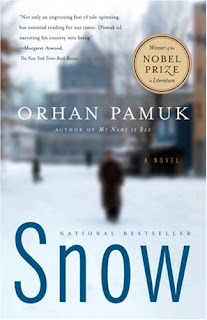 Desperately seeking a literary work to get me out of my recent reading rut, I turned to a novel suggested by one of the listers on the College Board listserv for A.P. English instructors ... and the novel turned out to be one of the best things I've read all year.

Set in Istanbul in the early 1990s, Snow tells the story of an exiled Turkish poet, Ka, who returns to his homeland posing as a journalist who is reporting on a recent series of suicides by young girls (these "Suicide Girls" have been struggling with the social and religious implications of covering their hair with the traditional headscarves). Ka is suffering from a profound writer's block -- and a blizzard is just beginning that will eventually seal off the residents of Kars for the next few days -- but Ka's return creates a sensation as he encounters members of a local theater troupe, fundamentalist radicals, Turkish law enforcement, and Ipek -- a beautiful woman who exposes Ka to love *and* the ability to once again compose poetry.

A simple summary, of course, doesn't give you much of a feel for the power of the prose, achieved through compelling conversations between characters that explore the various interpretations of words and actions that make up the belief system of Islam. For me, some of the most fascinating passages involved characters as they discussed the actions within a publicly televised play, and what social and religious implications those actions held for viewers. Pamuk's portrayal of both liberal and conservative Islamic mindsets remains compassionate throughout the narrative, offering the reader a rare glimpse of the impetus behind the tensions that continue to exist between Middle Eastern and Western lifestyles.

There is also a subtle complexity to the storytelling that I found enjoyable. Part of that subtlty comes from Pamuk himself, who is ultimately a character within the story (and who, it is revealed, is telling us this story four years hence). Additionally, I found delightful Pamuk's descriptions of the nineteen poems Ka comes to compose while in Kars; as readers, we are given vague sketches of each poem -- its composition, its style, its themes and images -- yet never given the actual poems ... which somehow heightens the overall effect and power of each poem.

A thoroughly enjoyable book that I highly recommend! Check it out.
Posted by Tim Strzechowski at 10:58 PM No comments: 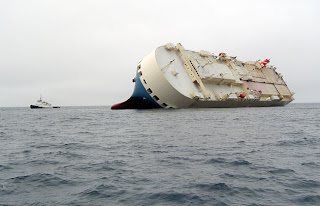 The Rudderless Ship of Reading: Summer/Fall, 2009

It's been an odd few months of reading, and very unlike me to be this haphazard in my literary choices over a period of months. So although I've written nothing here since early June about what I've read, I have actually read quite a bit -- it's just been "all over the place."

Over most of the summer months, my reading consisted of four books: rereading Paradise Lost, Nicholas Nickleby, and The Old Curiosity Shop for my two Newberry classes, and tackling David Foster Wallace's Infinite Jest. While my interest was piqued early on in the reading of Wallace's "masterpiece" -- and certain passages were by turns hysterical, brilliant, or incomprehensible -- I was having a tough time keeping any sort of Big Picture in mind during the reading. Since Wallace is often compared to Pynchon and Delillo, I found myself noticing various parallels in style, motif, theme, etc. But, to be frank, a thousand pages is still a thousand pages, and although a friend of mine and I met up one evening for pizza to discuss our readings of the book (she was reading it too, and totally digging it!), it became more and more difficult for me to continue. Finally in early August, just as I was around page 600 in Infinite Jest ...

... Thomas Pynchon's new novel Inherent Vice came out! YES! So I took a week or so to slowly, savoringly enjoy the wackiness of this beautifully written work (which I have yet to write about here, but I will soon). Afterward, I found it impossible to return to the Wallace tome. And it was the start of the school year anyways by that time, so ... Infinite Jest remains, sadly, unfinished.

Overlapping much of this time period, however, was the prep time I needed for a fall seminar I was scheduled to co-teach with a Newberry colleague of mine. We were planning to collaborate on a seminar whose focus was Thomas Pynchon's thousand-page Against The Day, and so a portion of my summer months was additionally occupied with rereading that novel and doing some preliminary research. Unfortunately, low enrollment and some unforeseen school obligations led me to bow out of teaching the seminar, leaving Against the Day only partially reread and researched.

By late August school had begun and I was in the mode of rereading the usual books I have to teach during the early months of school -- The Crucible, The Scarlet Letter, Macbeth, Letters From Wolfie. During this time I "tried on" several books, just to jump-start a reading pattern that would kinda get me back to normal: I reread some passages from Lord of the Rings, a few chapters from some random Dostoyevsky, toyed with reading a Philip K. Dick novel, and even read a beautiful book by Marilynne Robinson, Housekeeping (which I have yet to also write about here, but I will soon). Nothing was grabbing me ...

... Until I started reading Orhan Pamuk's Snow. This was one of the most captivating books I've read all year, and I simply stumbled across the title via the College Board's listserv for A.P. English teachers. I'll finish the book in the next few days, and I look forward to writing about it here (as well as catching up on my other book reflections).

So, while I haven't read much ... I have read a lot ... much of it a strange collection of rereadings, incomplete readings, and two or three gems. I'll catch you up on the gems shortly. = )
Posted by Tim Strzechowski at 3:07 AM 1 comment: