Here is the Associated Press article:

NEW YORK - In books such as "Slaughterhouse-Five," "Cat's Cradle," and "Hocus Pocus," Kurt Vonnegut mixed the bitter and funny with a touch of the profound.
Vonnegut, regarded by many critics as a key influence in shaping 20th-century American literature, died Wednesday at 84. He had suffered brain injuries after a recent fall at his Manhattan home, said his wife, photographer Jill Krementz.
Vonnegut's more than a dozen books, short stories, essays and plays contained elements of social commentary, science fiction and autobiography.
"He was sort of like nobody else," said fellow author Gore Vidal. "Kurt was never dull."
A self-described religious skeptic and freethinking humanist, Vonnegut used protagonists such as Billy Pilgrim and Eliot Rosewater as transparent vehicles for his points of view.
[...]
Vonnegut once said that of all the ways to die, he'd prefer to go out in an airplane crash on the peak of Mount Kilimanjaro. He often joked about the difficulties of old age.
"When Hemingway killed himself he put a period at the end of his life; old age is more like a semicolon," Vonnegut told the AP.
One of the best quotations from Vonnegut comes from this article from the New York Times:
[...] To Mr. Vonnegut, the only possible redemption for the madness and apparent meaninglessness of existence was human kindness. The title character in his 1965 novel, "God Bless You, Mr. Rosewater," summed up his philosophy:
"Hello, babies. Welcome to Earth. It's hot in the summer and cold in the winter. It's round and wet and crowded. At the outside, babies, you've got about a hundred years here. There's only one rule that I know of, babies - 'God damn it, you've got to be kind.' " [...]
Posted by Tim Strzechowski at 7:29 AM No comments: 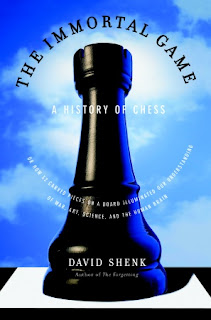 David Shenk, The Immortal Game: A History of Chess

When my son Matthew was six years old, I taught him how to play chess.

Today, as a ten-year-old chess player, he's pretty good and has competed in a few tournaments. Like bowling and baseball, I hope that chess will become a lifelong interest for him and, some day, be one of the things he'll teach his own children.

This past fall he participated in his school's chess club, which prompted me to look into a few books related to chess strategy, openings, endgames, and -- most interesting to me, personally -- the history of the game.

Shenk's The Immortal Game is an excellent read for anyone who is not only intrigued by the game's centuries of development, but also interested in the pragmatic tactics of specific matches. Shenk provides a readable account of the game's development, from its origins in Persia and Egypt through its growth in medieval Europe to its metaphorical significance throughout modern history, all the while exploring the game's unique hold on the human mind at particular points in history: the significance of how the pieces developed over time (e.g., the "Bishop" was once the "Fool"), the ways in which the game came to represent the human condition at certain historical moments (e.g., the Enlightenment's distaste for monarchy led to the development of Pawn importance), and a variety of such innovations to a game that has captured the hearts and minds of players for centuries.

Interspersing the history, Shenk focuses on the play-by-play action of the "Immortal Game," an actual match that took place in London on June 21, 1851 between Adolf Anderssen and Lionel Kieseritzky, two of the world's top chess players at the time. By giving the reader an actual competition to follow, the author maintains two narratives simultaneously: the "big picture" history of the game, and the "personal" account of how the game is opened, developed, and won (or lost) via its manipulation of time, space, and simple human skill.

If you dig chess, this is a great read! The Immortal Game comes with an accompanying website (and I'm hoping to beat my esteemed colleague after over a month of play action!). Check them both out!

P.S. It's spring break and, between re-reading both Beloved and Bleak House, I'm hoping to squeeze in a Philip K. Dick novel and a Miles Davis biography. Wish me luck!

Posted by Tim Strzechowski at 10:18 PM No comments: