Just finished reading this one.

I'm a sucker for a good ol' science fiction story, and "good" science fiction must begin with a solid "what if?" premise (e.g., "What if a human infant were raised by Martians and then brought back to Earth?" asks Robert A. Heinlein in Stranger in a Strange Land; "What if androids became so humanlike that it was virtually impossible to tell them from humans?" asks Philip K. Dick in Do Androids Dream of Electric Sheep?). Arthur C. Clarke, best known for his collaboration with director Stanley Kubrick in writing 2001: A Space Odyssey (1968), delivers the goods in this novel that essentially asks, "What if an unknown celestial object of several trillion tons entered our solar system at remarkable speed? What would be the ramifications?"

The story traces the exploration of the aforementioned object, dubbed "Rama" by the folks at Project SPACEGUARD. A perfect cylinder of vast proportions, Rama hurls toward our Sun. The crew of the spaceship Endeavor, headed by Commander Norton, must attempt to explore the inside of it before it reaches and circles the Sun . . . or is it actually planning to attack our solar system? No one really knows, and part of the fun of this novel is the way Clarke toys with the reader's expectations of exactly what Rama is and what its purpose in our part of galaxy is supposed to be!

While this novel doesn't offer too much in the way of commentary on modern society (or at least it isn't as heavy-handed as some science fiction can be), it fulfills another requirement for "good" science fiction: it uses modern scientific theories as a starting point, then pushes those theories to their potential cognitive limits. For example, what might happen to atmospheric conditions within a vast enclosure like Rama if its temperature began to rapidly increase while it also began spinning at a particular rate? Such questions pertaining to areas like astronomy, physics, meteorology, chemistry, etc. are also part of what makes this novel a fun read!

Enjoy!
Posted by Tim Strzechowski at 11:15 AM No comments:

The Secret History, by Donna Tartt

This was one of the best books I've read in a long time. I had heard its title mentioned several times from different people, yet knew nothing about it other than it was one of their favorites. When you read this book, you can see why!

The novel is narrated by Richard Papen, a young man who goes to a New England college and decides to study Greek and Classical Studies with a somewhat mysterious professor (he only teaches Greek, he only teaches a handful of students in his office, and he refuses a salary, among other eccentricities) and his five students (none of whom are permitted by the professor to take classes other than his). Richard eventually becomes part of this elite group and, one night, the students take part in a Dionyssia in the middle of the woods -- an event that becomes catastrophic for each of them. The story then traces the students as they cope with the consequences of their late-night revelry: murder, guilt, obsession, and the rapid unraveling of their lives on campus, all leading to an explosive conclusion!

This is a page-turner that I would especially recommend to literature/humanities geeks or anyone who is college-bound. It's filled with university slices-of-life, and the characters sprinkle their dialogue with allusions to tragedy, philosophy, linguistics, etc. just enough to make the reader feel smart. The Secret History is one of those books I will find myself re-reading every few years because I'll want to revisit these characters again, and again.
Posted by Tim Strzechowski at 7:38 AM No comments: 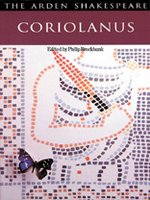 Having the good fortune of being in two reading groups affords me a chance to read for pleasure and see some friends, time for which is considerably scarce of late. One of these reading groups is with a handful of Argo alums, and we try to gather once a year, usually around the winter break, to read and discuss one "obscure" Shakespeare play. In the past we read King John and Cymbelline (although last year we broke from the Shakespeare tradition and read the entire Divina Commedia). This time around, we chose The Tragedy of Coriolanus.

I enjoyed this play and find it somewhat disappointing that it isn't as "popular" as many of Shakespeare's other tragedies. While it lacks the cosmic depth of Lear and Hamlet, or even the range of emotion found in Macbeth and Othello, Coriolanus seems to me a perfect companion piece to any study of Julius Caesar, with its ancient Roman storyline and its obvious political commentary. The citizenry of Rome is explored more in depth in this play, yet both plays examine the give-and-take between the rulers and the ruled in interesting ways. Before we meet as a group, I'd like to go back and re-read a few passages more closely to figure out what Shakespeare might be "saying" about politics, the ruling class vs. commoners, human behavior (often described in cannibalistic or animalistic images), etc.

Typically with me, whenever I read a Shakespeare play for the first time I tend to notice his use of imagery most of all (thanks, Prof. Boyer! : ) ). It seems like everything Will wrote makes use of images relating to disease/infection, blood, body parts, animals, and food/eating. However, there's a cool butterfly reference that flutters through various parts of the play, culminating in Act V, sc. iv, lines 11-14, which corresponds to the changing nature of the title character. Also, I picked up on a TON of repetitions, and I wonder how that particular stylistic device relates to Coriolanus and the play as a whole. Again, I need to go back and consider some of these before the group meets.

Coriolanus is definitely one of the better Shakespeare plays I've read!
Posted by Tim Strzechowski at 12:58 PM No comments: