"My Date with Dostoyevsky" - Part II

Well, the best laid plans o' mice and men oft' go awry ... My original plans to read The Brothers Karamazov one chapter per day (and thus finish it by Halloween) have slowed considerably, not only due to reading a dozen other things simultaneously for school, the Newberry, the Biblioholics A, and pure fun, but also because The Brothers K simply cannot be rushed at such a daily pace. In two months' time I have managed to finish the first four books ... roughly just short of a third of the novel ... and while I will not achieve my "goal" in terms of time, I have come to appreciate just why this novel is considered a masterpiece!

Talk about a novel that is totally character-driven! What is interesting is that Dostoyevsky was a huge fan of Dickens's novels, but there is little similarity between the two. The Brothers K has a plot that crawls, but that's fine ... He pauses on each character, whether major or minor, and allows each one to philosophically interact with others. So while an entire section of the novel (say, Book II) has very little in the way of action, the philosophical complexity and characterization fuel the reading experience!

For several years now, I've been intrigued by the ways in which certain authors demand a particular method (or style) of reading. Milton seeks a "fit reader," but the way you read Joyce is different from the way you read Pynchon, and the way you read Dickens is clearly not the way you read Dostoyevsky. So as I read and teach Paradise Lost and Little Dorrit, and enjoy Naguib Mahfouz and David Foster Wallace, I must shift into fourth for evenings with Dostoyevsky! : )

Great stuff so far!
Posted by Tim Strzechowski at 7:12 AM No comments:

Katherine Paterson, Bridge To Terabithia
Just finished this book, having read a chapter a night with my ten-year-old son. This is also our November selection for the Biblioholics Anonymous. Either way, it's a great book, but it's not at all what I expected.
For some inexplicable reason, I expected a fantasy novel along the lines of C.S.Lewis's The Lion, The Witch, and the Wardrobe. I have absolutely no justification for expecting that ... maybe it was something about the title. Nevertheless, I was surprise to find that it was essentially the story of a ten-year-old boy named Jess Aarons, a loner who aspires to be the "fastest runner in the fifth grade" until he befriends Leslie Burke, a free-spirit who introduces him to confidence, compassion, and the value of occasionally visiting a "secret place" that only they can go to in the nearby forest -- a place without adults and rules, a place of pure escape: Terabithia. While their visits are initially punctuated by brief episodes of individual growth, it's not until tragedy strikes that Jess is able to see the true value of Terabithia.
This is a powerful book! Check it out! 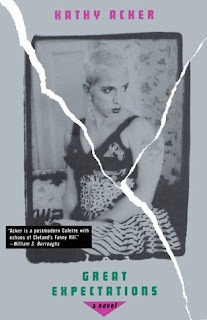 Kathy Acker, Great Expectations
Truth be told, the jury's still out on this one ...
Recently, one of the folks on Pynchon-L mentioned the works of Acker (whom I had never heard of) and said that fans of Pynchon would like her work. After searching a bit at the local bookstores, I was able to special order a copy of Great Expectations, which the lister recommended was a good book to start with.
Part surrealistic cut-up method a la William S. Burroughs; part plagiarized text which draws heavily from Dickens's Great Expectations, The Story of O, Keats poetry, and a wild assortment of other traditional and contemporary works; part confessional memoir of a punk-ethos author; part compellingly poetic but obscenity-charged erotica -- Acker's work is not a "novel" in the conventional sense. Told through a PoMo collection of fragmented narratives that weave together other literary works with Acker's own reflections on (among other things) her mother's suicide, I found myself likening the reading experience to that of Burroughs's Naked Lunch with a touch of Gertrude Stein's experimental punctuation and sentence structures. And while many passages might have been shocking back when the work was published in 1983, I found much of the obscenity quaintly reminiscent of the Beats.
But what I thought most compelling here was the plagiarism, apparently a "technique" that Acker was known for -- lifting passages almost verbatim from a wide variety of texts and somehow weaving them together with her own narrative to create an entirely new work of art -- sort of the literary equivalent to "sampling." And since sampling music gained popularity in the Eighties through such bands as 2 Live Crew and Big Audio Dynamite (anyone remember those bands? LOL!), it would make sense that her compositional method ran concurrent with underground (and emerging mainstream) music at the time.
I'm not entirely convinced that a fan of Pynchon will enjoy the writing of Kathy Acker ... but I would be willing to check out one or two other novels by her to see if there is depth and breadth to her narrative technique. Other novels by Acker can be found here.

Posted by Tim Strzechowski at 9:31 PM No comments: