Some Thoughts on the Pleasures of Being a Re-Reader
By VERLYN KLINKENBORG
Published: May 29, 2009

I’ve always admired my friends who are wide readers. A few even pride themselves on never reading a book a second time. I’ve been a wide reader at times. When I was much younger, I spent nearly a year in the old Reading Room of the British Museum, discovering in the book I was currently reading the title of the next I would read.

But at heart, I’m a re-reader. The point of reading outward, widely, has always been to find the books I want to re-read and then to re-read them. In part, that’s an admission of defeat, an acknowledgement that no matter how long and how widely I read, I will only ever make my way through a tiny portion of the world’s literature. (The British Museum was a great place to learn that lesson.) And in part, it’s a concession to the limits of my memory. I forget a lot, which makes the pleasure of re-reading all the greater.

The love of repetition seems to be ingrained in children. And it is certainly ingrained in the way children learn to read — witness the joyous and maddening love of hearing that same bedtime book read aloud all over again, word for word, inflection for inflection. Childhood is an oasis of repetitive acts, so much so that there is something shocking about the first time a young reader reads a book only once and moves on to the next. There’s a hunger in that act but also a kind of forsaking, a glimpse of adulthood to come.

The work I chose in adulthood — to study literature — required the childish pleasure of re-reading. When I was in graduate school, once through Pope’s “Dunciad” or Berryman’s “The Dream Songs” was not going to cut it. A grasp of the poem was presumed to lie on the far side of many re-readings, none of which were really repetitions. The same is true of being a writer, which requires obsessive re-reading. But the real re-reading I mean is the savory re-reading, the books I have to be careful not to re-read too often so I can read them again with pleasure.

It’s a miscellaneous library, always shifting. It has included a book of the north woods: John J. Rowlands’s “Cache Lake Country,” which I have re-read annually for many years. It may still include Raymond Chandler, though I won’t know for sure till the next time I re-read him. It includes Michael Herr’s “Dispatches” and lots of A.J. Liebling and a surprising amount of George Eliot. It once included nearly all of Dickens, but that has been boiled down to “The Pickwick Papers” and “Great Expectations.” There are many more titles, of course. This is not a canon. This is a refuge.

Part of the fun of re-reading is that you are no longer bothered by the business of finding out what happens. Re-reading “Middlemarch,” for instance, or even “The Great Gatsby,” I’m able to pay attention to what’s really happening in the language itself — a pleasure surely as great as discovering who marries whom, and who dies and who does not.

The real secret of re-reading is simply this: It is impossible. The characters remain the same, and the words never change, but the reader always does. Pip is always there to be revisited, but you, the reader, are a little like the convict who surprises him in the graveyard — always a stranger.

I look at the books on my library shelves. They certainly seem dormant. But what if the characters are quietly rearranging themselves? What if Emma Woodhouse doesn’t learn from her mistakes? What if Tom Jones descends into a sodden life of poaching and outlawry? What if Eve resists Satan, remembering God’s injunction and Adam’s loving advice? I imagine all the characters bustling to get back into their places as they feel me taking the book down from the shelf. “Hurry,” they say, “he’ll expect to find us exactly where he left us, never mind how much his life has changed in the meantime.” 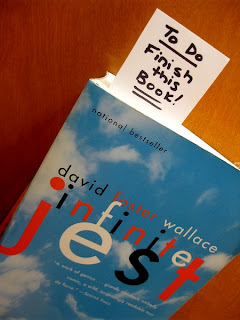 David Foster Wallace's Infinite Jest has been on my bookshelf for about a decade, unread. I've wanted to read it, but never had the ambition to tackle all 1,079 pages. And then Wallace dies last year, thereby ruining my hopes of ever running in to him in a local Appleby's and asking him if reading his novel is really worth my time ...

Enter "Infinite Summer," an online group read project that divides the novel into approximately 15 weeks of reading (75 pages or so per week), which is very do-able for me (given all the other stuff I'm currently reading). Coupled with a website, a message board, a Facebook page, and an XML feed, it's the perfect opportunity to read this book within an online community and discuss accordingly. Plus, a few colleagues and friends are thinking about joining in on the reading, too.

Many thanks to my friend Ilene for sharing this with me! I look forward to starting this in a couple of weeks.