Herman Melville, Moby-Dick, or The Whale

Back when I was an undergrad student in Dr. Gus Kolich's American Literature class at Saint Xavier University, we were assigned to read Moby-Dick during our week of Spring Break. Not being a participant in the usual Malibu Beach spring break tomfoolery, I stayed home, choosing instead to take the train to the Loop and make a solitary visit to the Art Institute of Chicago with sketchbooks and bottled water in my carpetbag ... including my copy of the Norton Critical Edition of Moby-Dick. Stopping for lunch on a glorious spring afternoon at the McDonald's on Randolph and Dearborn, I read for an hour, whereupon I resumed the rest of my day's excursion.

It wasn't until I returned home that night that I realized -- "Oh no! I left my copy of the book at McDonald's!"

The next morning, hoping for a slim chance of recovering my castaway (what are the chances of finding a lost item in a downtown fast food establishment the next day!?), I returned to the same McDonald's assuming it was a futile effort, but a rescue nonetheless worthwhile. And lo and behold! When I walked in the doors, there lay my very own Norton Critical Edition of Moby-Dick on the windowside counter, primly awaiting its owner! Apparently NO one was gonna steal that book! LOL

And over the last twenty years or so, I've taught selections of the novel to my American Literature students. Granted, it's not a book that in its entirety goes over well with high school kids ... but in selected chapters, it's a palatable and engaging read.

So when the Biblioholics Anonymous decided to read this novel for their March selection, I jumped at the chance to re-read this book again ... to re-read the whole thing!

More than ever, I am reminded of just what an underrated book this is. Completely panned in Melville's lifetime, and today often viewed by readers (or, should I say, people who haven't read it but merely think they know what it's about) as a stodgey classic that elicits boredom, nothing could be farther from the truth! Moby-Dick is a celebration of one of the most important and forgotten industries of 19th Century America. Encyclopedic in its scope, biblical in its sublimity, subtle in its humor, and engaging in its spinning of a nautical yarn, Melville's masterpiece remains relevant over a century and a half later -- the megalomaniac Captain Ahab has a counterpart in contemporary politics, the Pequod remains a microcosm of American society, and many of narrator Ishmael's philosophical musings either sparkle with meaning or reinforce the ambiguity with which we all must share in our existence. This time through, I noticed some of its politically incorrect observations regarding people of Asian and African-American heritage; I see the intricacy of the chapter ordering, which I'd never noticed before; and the deliberate ambiguity that Melville fosters throughout the narrative in terms of how we should perceive the world around us -- these are the benefits of re-reading a major literary work twenty years later!

Don't let any reductionist tell you: "It's about a crazy guy chasing a whale."

Enjoy!
Posted by Tim Strzechowski at 10:02 PM No comments: 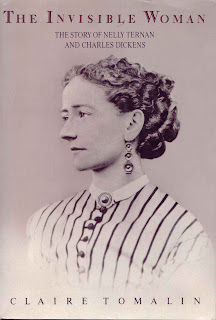 Claire Tomalin, The Invisible Woman: The Story of Nelly Ternan and Charles Dickens

I scored a copy of this book, used, about a month ago. Probably not something of much interest to the general reader, it's definitely a good book for anyone interested in learning more about the woman who inspired the single most popular English writer of the 19th Century to reinvent himself in middle-age, along the way fracturing his family and friendships, his business partnerships, and his twenty-four year marriage.

Ellen ("Nelly") Ternan was an eighteen-year-old actress of stunning beauty when she met the forty-five-year-old Dickens, and the ensuing relationship caused a literary scandal and a public relations nightmare for a writer once beloved by his readers for his stories of hearth and home. Not to be ruined by the scandal, he rebounded with two blockbuster serial publications: A Tale of Two Cities and Great Expectations. Nelly and Dickens continued their relationship for the next thirteen years until he died in 1870. She eventually remarried and lived a relatively normal life, barely ever mentioning her relationship with Dickens, and died in 1913.

Tomalin's book is considered a landmark of biography because of its success in fashioning a life story from such scant material. Indeed, while she and Dickens were together the author and his loyal friends took great pains to conceal her identity in coded terms; Dickens's best friend and biographer, John Forster, never even mentions Nelly in his biography of Boz. Which is probably why I felt that the strengths of Tomalin's book lie in its depictions of pre- and post-Dickens-era Nelly. With so little to go on during those thirteen years, Tomalin essentially rehashes the usual biographical information on Dickens himself (to which I would direct the reader to Fred Kaplin, Edgar Johnson, and Peter Ackroyd)... but if you want to read about women of the theater in the early 19th Century, the circumstances leading up to the scandalous relationship, and the way in which a woman begins life anew following her lover's death without hardly a glance back, this is a pretty good book.
Posted by Tim Strzechowski at 12:05 PM No comments: 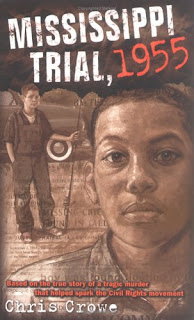 In my continuing search for good YA novels that I can read with my freshman students, Mississippi Trial, 1955 came highly recommended by a colleague. I finally got around to reading it and, truth be told, this is a fantastic book that has something for everyone.

A piece of historical fiction set in the late-1940s thru the mid-1950s, it essentially tells the story of Emmett Till, a fourteen-year-old Chicago boy who went to visit relatives in Mississippi and became the victim of a heinous racially charged murder that sparked the Civil Rights movement. The novel is told from the point-of-view of fictional character Hiram Hillburn, who returns to visit his elderly grandfather in the summer of 1955. The South is not exactly as he remembers it when he lived with Grandpa seven years earlier; Hiram is now aware of the racial tensions and Jim Crow mentality that are part of Delta culture. And when he becomes embroiled in Emmett's kidnapping, murder, and the subsequent trial, Hiram once and for all glimpses what his father has long called the "ugly side" of the South.

But what makes this book so engaging on different levels is the story, which also explores father/son relationships, child abuse, homophobia, etc. And, to be honest, the trial itself is grippingly recounted with the expert pacing of Harper Lee's To Kill A Mockingbird (obviously one of the novel's influences). Overall, Crowe maintains excellent control of his characterization and storytelling, balancing suspense with poignancy, and he gives the reader a book that is both thought-provoking and simply a "good read."

Enjoy!
Posted by Tim Strzechowski at 7:22 PM No comments: