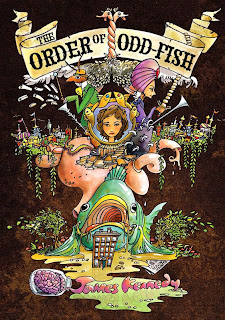 Start with a healthy dose of grotesque Victorianism -- Charles Dickens or Lewis Carroll will do. Add splashes of Harry Potter and Franz Kafka with a cup of Monty Python and Edward Gorey. Season with pinches of William S. Burroughs, Joseph Heller, and the Book of Jonah ... and whatcha get is a deliciously absurd debut novel by Chicago author James Kennedy called The Order of Odd Fish.

Jo Larouche is a mild-mannered thirteen-year-old girl who, after visiting her Aunt Lily's Christmas costume party, finds herself journeying to the faraway land of Eldritch City, where she discovers a secret about her parents *and* herself that could topple the entire town. Befriending a bevy of cockroach butlers, engaging in a series of adventures involving insult guns, moving tapestries, and battling the evil Fiona Fuorlini atop armed ostriches in a climactic duel, Jo must come to terms with who she is in this highly original coming-of-age story for female readers.

What I found most enjoyable about the novel, however, was the author's sense of comic timing. In my opinion, he ranks among such writers as John Kennedy Toole (A Confederacy of Dunces), Oscar Wilde, and Charles Dickens at his comic best -- The Pickwick Papers -- for creating dialogue and situations that bristle with humor and charm! And even when the elements of plot push the boundaries of plausibility, you find yourself enjoying the pure absurdity of the moment thanks to a writing style that remains engaging and original.

This is pure, unadulterated FUN! Enjoy!
Posted by Tim Strzechowski at 10:37 PM

Thanks, Tim! Getting compared to geniuses like Toole, Wilde, and Dickens makes me feel like a million bucks. I'm really glad you enjoyed the book!

No, thank *you*! /Odd Fish/ was the most fun I've had while reading in a long time! Looking forward to more works.

I see you're in Bolingbrook. I don't know if you've seen this or not, but we're putting on a gallery show / extravaganza of Order of Odd-Fish fan art right here in Chicago starting the weekend of April 17.