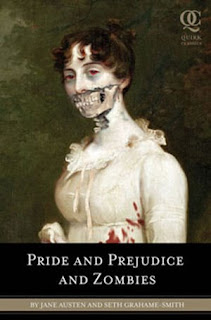 Jane Austen and Seth Grahame-Smith, Pride and Pejudice and Zombies

"Parallel fiction" (a name which I abhor) is a relative newbie in terms of literary genres. It takes many forms, anything from telling the "backstory" of a minor character from a major work of literature (think Rosencrantz and Guildenstern Are Dead, Wide Sargasso Sea, or basically anything by Gregory Maguire) to telling the possible life of an author (Dan Simmons's recent Drood is a good example). But Grahame Smith puts a slightly different spin on this genre: Why not simply reprint the original literary masterpiece ... and weave zombies and ninjas into the existing storyline?

Thus, Netherfield and Pemberley remain the same as always, with the prejudiced Elizabeth Bennett and the proud Mr. Darcy doing their usual cat-and-mouse against the swirl of Lady Catherine's haughtiness, Mrs. Bennett's peevishness, Mr. Wickham's deceitfulness, and the typical Regency background of Jane Austen's novel. But a recent "plague" has apparently rendered the English countryside aswarm with zombies -- delicately referred to as "unmentionables" in Grahame-Smith's world -- and scene after scene in the novel is interrupted by mayhem from the undead, whereupon various characters must draw upon their ninja skills to slay the attacking unmentionables before returning to the latest ball or afternoon tea.

I must admit, it was curiosity more than anything else that drew me to get this book. But the result is a weird "two great tastes that taste great together" approach that -- somehow -- works! As you might imagine, the Austen/Ninja contrast is amusing at first. But in this re-imagined Janite world, one's ninja training and skills become a mark of status (or lack thereof) in much the same way money and being landed function in the original. And the ubiquitous zombies become a metaphor for the faceless social norms that continually push and pull against the characters of Netherfield. And the book is funny, especially when we see Elizabeth Bennett remove an ankle dagger and proceed to take out two or three zombies feeding on servants.

Additionally, with so much of the original novel intact and untouched here, I could see a young reader engaging with this book for the pure fun or it and, in the process, reading all of Pride and Prejudice.

This is a delightfully wicked little book. Enjoy!
Posted by Tim Strzechowski at 8:00 AM