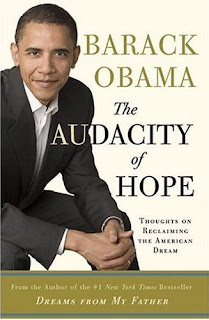 Barack Obama, The Audacity of Hope

Having watched all the presidential debates, heard all the sound bites, and seen the various and sundry interviews prior to his election win, I figured it's high time I read the writings of President-elect Barack Obama. I decided to begin with The Audacity of Hope, since it seems to be the most relevant to his immediate obligations once he takes office in January (his previous book, Dreams From My Father, appears more autobiographical in nature, with a focus on his formative years).

The Audacity of Hope is a series of reflections on a wide variety of subjects, from areas of politics to the concerns of race and faith to Obama's concluding notions of family. The book offers a snapshot of Obama's first years as a U.S. Senator while showcasing many of his positions on such topics as educational reform, foreign policy, gay rights, etc. But what makes this book such an enjoyable read -- aside from Obama's stylistic skill -- is the way in which he seasons each chapter with a liberal dose of personal anecdote. You witness him as a loving father and husband; you chuckle as he relates his campaign misadventures (some of the funniest sections recount his campaign vs. Alan Keyes); you marvel at his command of political history (especially that of Colonial-era America, not to mention the eras of Lincoln and Kennedy); and you admire his ability to present issues as volatile as abortion with balance and moderation. In the weeks leading up to the presidential election, Obama made a name for himself as a candidate who does not get easily rattled in difficult situations; reading this book, you recognize that this ability to remain calm and level-headed is genuinely part of his nature.

Although there were moments in this book when Obama seemed to get a bit didactic -- often times his diatribes on what "should" be done or what he "believes in" sounded like endless campaign rhetoric -- his overall message was clear, consistent, fair, and balanced. Barack Obama writes the way he speaks ... with confidence, with optimism, with clarity of vision.

A good read that I highly recommend!

Truth be told, it feels like a long time since I've posted anything here, even though I've been reading constantly since the start of the school year. Much of my time has been spent re-reading things for school -- The Crucible, The Scarlet Letter, Moby-Dick, Macbeth, Hamlet, and various YA novels, not to mention Our Mutual Friend and The Mystery of Edwin Drood for my fall Newberry seminar -- but as the holidays approach I hope to be able to catch you up here on other things I've read ... for FUN no less! LOL