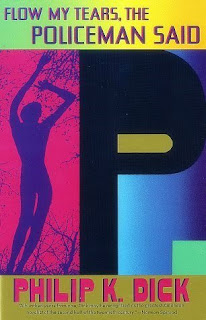 Diving into a Philip K. Dick novel is always a fun experience, especially when one has spent much of the year in foggy Victorian England. Dick's sci-fi universe is filled with paranoid protagonists, alternate realities, and government conspiracies galore!

It's 1988, and Jason Taverner is a celebrity TV entertainer who, after a near-fatal confrontation with a jilted protege, finds himself in a dingy apartment, alone. He has cash, he has clothes ... but he has no identity, and all attempts to make contact with anyone who might know him prove fruitless. Taverner's dystopian world is one of ubiquitous and omniscient police and forced-labor camps for those who cannot be identified, so all of his efforts center around locating someone, anyone who can help him regain (or achieve) identity, all the while with Police General Felix Buckman hot on his tail.

Aside from exploring such themes as the search for identity, the nature of celebrity, the measure and value of cognitive intelligence, the need for genetic enhancement, and even the legalities of certain acts we deem criminal, this novel has the distinction of being the subject of one of the later monologues in Richard Linklater's 2001 film Waking Life, where one of the novel's final chapters is paralleled to the Book of Acts from the New Testament (for those who are interested, here's the King James Version).

When I finish obligatory readings, I love to immerse myself in the universe of Philip K. Dick for some pure escapism. Flow My Tears does not disappoint! Check it out.
Posted by Tim Strzechowski at 7:04 AM