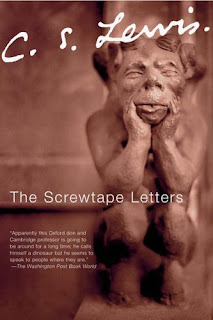 This was a re-read for me, and the most recent selection for my Book Group.

The Screwtape Letters is a brilliantly subversive little book written in the old epistolary novel form. It consists of a series of letters written from a veteran demon, Screwtape, to his apprentice demon nephew, Wormwood, concerning advice on how best to subvert mankind. Throughout the letters you learn that Wormwood has a "patient" he must prompt daily toward sin, and Screwtape's advice reveals the nature of how and why we sin by giving us the demon's point-of-view: which human states of mind are most vulnerable to sinful thoughts, how best to stir within the human mind doubt in God (or, whom Screwtape calls "the Enemy"), and how to subtly nudge thought and behavior toward that which is most conducive to sin.

Lewis (as Christian a writer as they come, if you're familiar with his other works) makes the character of Screwtape profound, yet hilarious -- check out the conversational ways in which the uncle chides the nephew for faulty logic or poor writing. Most of the letters can be categorized, in one way or another, as comments on the Ten Commandments, the Beatitudes, the Seven Deadly Sins, and other such biblical lists of acceptable and unacceptable behavior. But what makes it enjoyable for me is the simple ring of truth to all he says, even when commenting on the little things in Life. For example, Screwtape offers the following observation to Wormwood:

"When two humans have lived together for many years, it usually happens that each has tones of voice and expressions of face which are almost unendurably irritating to the other. Work on that. Bring fully into the consciousness of your patient that particular lift of his mother's eyebrows which he learned to dislike in the nursery, and let him think how much he dislikes it. Let him assume that she knows how annoying it is and does it to annoy ... and, of course, never let him suspect that he has tones and looks which similarly annoy her."

(If you've been married for almost twenty years, you definitely see the truth in that.)

And have a Happy Thanksgiving!
Posted by Tim Strzechowski at 4:51 AM