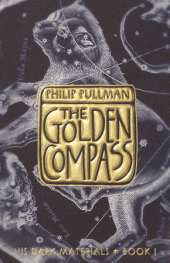 In my efforts this past week to catch-up on posting the books I've read since this summer, here's another one I read back in September for my Book Group.

I've always been more of a fan of sci-fi than fantasy, although I recall reading fantasy fiction earlier than I started reading sci-fi. Maybe it was the silliness of the old Conan the Barbarian books I was reading when I was twelve, or maybe it was the sci-fi aspects of the original Star Wars trilogy in the late '70s/early '80s, or maybe it was the simple fact that Tolkien's The Lord of the Rings is a hard act to follow and remains THE gold standard by which all fantasy must be judged -- whatever the reason, I've always had more of an attraction to science fiction than fantasy.

So when I finally got around to reading Book I of Pullman's His Dark Materials trilogy, it was so refreshing to finally be in the presence of a fantasy world that can rival Middle Earth or the Galactic Empire! With brilliant pacing and compelling characters, not the least of which is the mysterious Lord Asriel, Pullman creates a struggle between Good/Evil that is as familiar as it is fantastical, and therein lies the attraction with fantasy fiction (at least for me): Tolkien's background in languages and medieval literature helped him fashion a world wherein we can hear echoes of Beowulf, King Arthur, Dante Alighieri, Macbeth, and even The Faerie Queen. I won't call it a "parallel universe," but "good" fantasy establishes resonance between the world of fantasy and our world, most often through echoes of our world's mythology. Tolkien does this. C.S. Lewis does this in his Narnia. And Pullman taps into that quality effectively with his Gobblers, scholars, daemons, and Dust. Regardless of whether one wants to argue the Christianity or atheism of his message (an argument that I find tiresome here), Lyra's world has just enough of a resemblance to ours to make this an excellent piece of fantasy writing.

Yet, I have not seen the film and have no intentions of doing so.

Tim
Posted by Tim Strzechowski at 11:16 AM