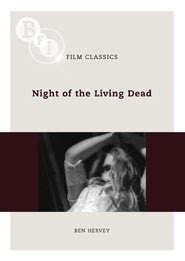 Like most of us, I remember being a kid and seeing George Romero's Night of the Living Dead (1968) for the first time on a black-and-white TV set around Halloween in the early Seventies. The film's realism was unnerving, and the scenes of cannibalism and gore -- not to mention the shock of the ending -- left me wary of strangers (were they zombies?) for a long time.

Here's a little volume that does justice to this cult classic. While many people are quick to dismiss Night of the Living Dead as anything from an early "gore film" to a poorly made low-budget horror flick, Hervey places the film expertly within its historical context to illustrate how the casting (an African-American "hero"), the setting (with its basement's echoes of the "fallout shelter" of the 1950s), and the images and sound effects all had resonance with an audience that had been watching footage of Vietnam war carnage on their television sets. Even the timing of the film's release (shortly after the assassinations of both Martin Luther King, Jr. and Robert Kennedy, and during a two-year window between the abolishment of the Motion Picture Production Code and the institution of the MPAA ratings system) added to its appeal to a young, radical audience!

Hervey also devotes whole sections to scene-by-scene analysis, often bringing into the discussion the many "interpretations" of the film that critics have proposed (e.g., the film is a satire of the Moral Majority that put Nixon into Office, etc.). Fortunately, Hervey never lets us forget that, in the end, Romero was making a film on a shoestring budget with friends, often setting up shots based on the limitations of his equipment, and such highbrow interpretations -- while fun to consider -- are likely exercises in little more than analytical futility.

This is a great read. If you like films, I highly recommend the BFI Film Classics series.
Posted by Tim Strzechowski at 10:35 PM