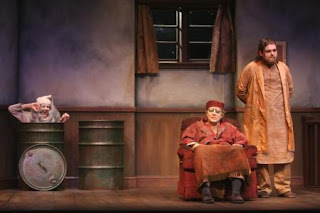 For years, I've taught Beckett's Waiting for Godot in my A.P. English class and I've used it in my "Literature of Hell" class at the Newberry Library. I find Beckett stark yet hysterical. Before the school year ended in May, my friend and I went to see a performance of Endgame at the Steppenwolf. So in prepapration for the performance I read the play.

In typical Beckett fashion, it's impossible to summarize a "plot" here. Instead, in Endgame you are faced with four characters who embody the fears, enslavement, bombast, and futility of all that is Twentieth-Century Mankind. Hamm is a blind, regal character who sits atop his "throne" on a stack of skids; he cannot move or see. Clov is his manservant/slave who engages Hamm in most of the play's dialogue; he cannot stop moving, and much of his "action" involves looking at/for things. Nell and Nagg are the elderly parents of Hamm, both passive and relinguished to ashcans that take stage prominance. Nothing really "happens" in the play, and the dialogue presents us with conversations, monologues, bickerings, a story-within-a-story, and various other moments that collectively take up 90 minutes or so of stage time.

But isn't that much like what modern existence is like? Beckett creates four characters, each of whom are metaphors for the problems and frustrations and fears that come with modernity. And there is a post-apocalyptic starkness to what they see outside those windows, lending a sheltered futility to all conversations in which they engage. And, like Godot, Endgame concludes in a moment of crisis, a moment of choice, a moment of pause ...

How will it be resolved? WILL resolution come? Beckett asks us ... but doesn't answer.

Endgame is hardly a beach read and Beckett is certainly not everyone's cup of tea. But if you enjoy dark comedy, check out this play.
Posted by Tim Strzechowski at 5:16 AM