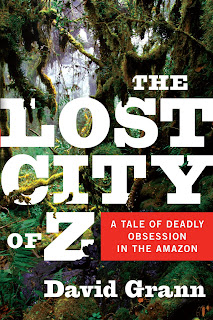 David Grann, The Lost City of Z: A Tale of Deadly Obsession in the Amazon

In 1925, British Colonel Percy Harrison Fawcett, along with his son and his son's best friend, led an expedition into the Amazon jungle in search of what Fawcett called the "City of Z," an ancient lost city once thought to be in the depths of Brazil. Despite being hailed as one of the leading explorers of the Amazon jungle, Fawcett and his party were never heard from again. In this book, which was expanded from a 2005 article in The New Yorker, journalist David Grann recounts his attempts to trace the Fawcett party's expedition into the wilderness in the hopes of learning (a) whatever happened to them, and (b) did they ever find the city they sought.

This is an outstanding piece of non-fiction that will keep you riveted throughout the reading. Not only does Grann keep the narrative of the expedition itself well-paced, but he gives the reader of solid sense of what Fawcett was like, flaws and all. His accounts of some of Fawcett's earlier expeditions are as amusing as they are gripping, especially when less-than-capable explorers were faced with the harsh conditions of the jungle and the demands that Fawcett put on anyone willing to join his party. Additionally, Grann's descriptions of the Amazon jungle -- its geography, its animals and insects, its various tribes (both friendly and deadly ones) -- make for a fascinating glimpse into a tropical world that is indeed a false Paradise.

Strongly recommended if you are looking for some good non-fiction!
Posted by Tim Strzechowski at 11:53 AM