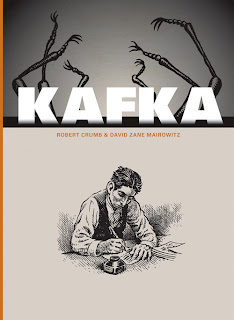 In addition to reading The Metamorphosis, I also snagged a copy of Mairowitz's comic "biography" of Franz Kafka, brilliantly illustrated by none other than Robert Crumb! I say "biography" because, in addition to providing a wonderfully insightful account of the author life and Jewish background, it also contains sizeable excerpts from Kafa's major and minor works, passages from his diaries, interpretations of his works in light of their historical significance, and even comments on Kafka and the "Kafkaesque" within pop culture. So, in truth, it's much more than a biography.

Yet the great attraction here (for me, at least) is the artwork of Crumb, himself the perfect artist to illustrate the absurdity, the angst, the alienation, the carnality, the subversion, and the twisted grotesque Vision of Kafka's tales! In typical counter-culture hallucinatory Crumb style, the manic pen moves in insane crosshatch shading as Crumb captures the grime of Kafka's Prague ghetto, or the climactic moments of In The Penal Colony, or finally the tubercular dissolution of the author himself. Even now in his mid-sixties, Crumb's artwork continues to dazzle!

This is a great educational resource for anyone interested in the life and fiction of Franz Kafka, or for anyone who just digs terrific graphics. Check it out.
Posted by Tim Strzechowski at 9:51 PM