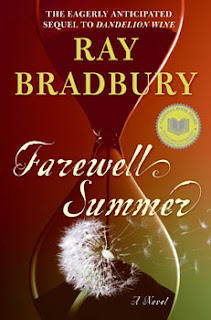 When was the last time you read a book in one sitting, with a smile on your face the whole time?

Farewell Summer is Bradbury's sequel to 1957's Dandelion Wine, a wonderful novel that captures the excitement of summer vacation when you're a little kid growing up in a small Midwest town in 1928. Life consists of little more than friends, pretend intrigues, lightning bugs, and the delicious feel of a summer breeze through your window. And while Dandelion Wine focuses on a "slice of life" with the residents of Green Town, Illinois (based on Bradbury's home town of Waukegan), much of the story follows the summer adventures of twelve-year-old Douglas Spaulding, his little brother Tom, and their buddies.

In Farewell Summer, published almost fifty years after the first novel, Bradbury continues the story of Doug et al, now during a brief Indian summer in early October, 1929. Doug and his buddies engage in a "war" with the adults of the town, a war that becomes a metaphor for the struggle over control one feels as a teen. The stealing of chess pieces from the old men who play chess in the park, the setting-off of firecrackers in the town hall bell tower, and the awakening thrill of watching a girl and an ice cream cone all come together to capture the transitions we all make from giddy summer to the sober realities of autumn.

My guess: You will read this book in one sitting, smiling the whole time. : )
Posted by Tim Strzechowski at 8:39 AM