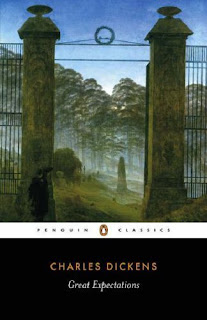 I have a "history" with this book that goes back over twenty years ...

When I was in my third year of college, my mother was diagnosed with cancer. Despite aggressive chemotheraphy treatments, in February, 1987 she fell into a coma and there she stayed for about two weeks until, one morning, she died.

At that time, I was in the process of reading Great Expectations (a cheap Bantam edition, as I recall) for the first time ... and I never finished it. Something about the book ... its cover, its story, maybe even its smell ... something about that book always struck me as distasteful, and although I've made a couple of feeble attempts to read the book since then, I've never been able to do it.

So finally finishing this book -- for my spring Newberry seminar -- is an achievement for me. It's a book that is fraught with personal feelings that I have had to overcome. Interestingly, although I finished the book today, it's taken me months of hammering away at its chapters to finally get through it.

When everything is said and done, I must admit that it's one of my least favorite Dickens novels. Apart from the great opening chapter and the delightful descriptions of Miss Havisham, I found it one of the darkest, most humorless books in the Dickens canon. Also, I suppose I'm used to Dickens giving his readers subplots, and here is the only novel written by Boz that has no subplot whatsoever (which is probably why we subject high school freshmen to it). In the villain Orlick we get an antagonist who is a genuine physical threat to protagonist Pip -- not the grotesquely caricatured villains of Quilp or Uriah Heep or even Mr. Carker, but a murderous criminal (virtually harkening back to Bill Sikes in Oliver Twist, but even Sikes I recall having a somewhat humorous treatment in his exchanges with Fagin). And although Dickens has given us melodramatic death scenes in the past (can anyone say "Little Nell" or "Dora Spenlow"??), I wonder now how I would have gotten through the death scene in Great Expectations had I finished the book back in '87.

Well, at least I can finally say I've read it ...
Posted by Tim Strzechowski at 1:50 PM