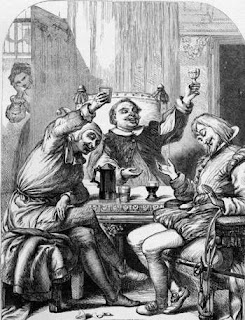 " Twelfth Night is a holiday in some branches of Christianity marking the coming of the Epiphany, concluding the Twelve Days of Christmas, and is defined by the Oxford English Dictionary as 'the evening of the fifth of January, preceding Twelfth Day, the eve of the Epiphany, formerly the last day of the Christmas festivities and observed as a time of merrymaking'.

"The celebration of Epiphany, the adoration of the Magi, is marked in some cultures by the exchange of gifts, and Twelfth Night, as the eve or vigil of Epiphany, takes on a similar significance to Christmas Eve.

"In some traditions it is taken to mean the evening of the Twelfth Day itself, the sixth of January. This apparent difference has arisen probably due to the old custom of treating sunset as the beginning of the following day. Therefore, according to confluent ancient traditions of the tides of time, Twelfth Night would have been celebrated as occurring on the twelfth day as different to the present custom of celebrating the day prior." [...]

Here is the Wikipedia citation from which this comes.

Here is the Shakespeare connection.

And here is why you should take down your Christmas decorations by tonight.