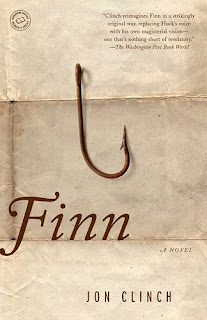 When it comes to film sequels, few approach the pure brilliance of films like The Godfather, Part II and Toy Story 2. Each of these films does what, in my opinion, makes a sequel excellent: it not only continues the narrative from the preceeding film, but it also enhances our understanding of the characters we met in the original by providing a riveting backstory to show us who and why they are the way they are. Most typical sequels do the former, but only the best ones can pull off the latter effectively.

Like a great sequel, Jon Clinch's Finn fleshes out the villainous Pap Finn for readers, and it's a job well done! Using a handful of chapters found early in Mark Twain's The Adventures of Huckleberry Finn as a basis for this novel, specifically Chapter 9 (in which Huck and Jim happen upon a naked corpse in a dilapidated house floating down the river, only to discover by novel's end that it was the body of Pap), Finn is an outstanding piece of parallel fiction that retells the Huck chapters through a third-person omniscent POV, *and* it provides readers with a glimpse of Pap's earlier years, including his relationship with his own harrowing father (the Judge), his relationship with a Negro girl which leads to the birth of Huckleberry, and the circumstances surrounding Huck's eventual life with the Widow Douglas.

As a writer, Clinch does an outstanding job of handling the source material from Twain, never playing loose with the details that readers for over a century have come to know. At the same time, he maintains a sense of the time period with details that never veer into anachronism, all the while telling a story replete with episodes that illustrate Pap's cruelty and recklessness and irresponsibility, tempered with brief moments of affection, and often seasoned with unflinching backwoods justice. You may not grow to love Pap Finn by novel's end, but there's no denying you come to understand him -- his actions, his values, his demons -- much better.

For anyone who has read and enjoyed Twain's masterpiece, Jon Clinch's Finn is an absorbing and rewarding read. Check it out!
Posted by Tim Strzechowski at 9:27 PM