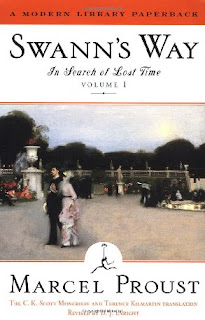 This was technically a re-read for me, since I first read Swann's Way with the Biblioholics Anonymous back in 1999, I believe. At that time, I thought this was one of the worst books I had ever read ... a colossel waste of time, six hundred pages of absolutely nothing happening, and all that silly French stuff. For years I carried around within me that embarrassing reductionist attitude, claiming ridiculously that "all the [book] is about is dipping cookies in tea."

My, how a decade of reading can change one's attitude.

Du Cote de chez Swann (trans. Swann's Way) is the first of seven volumes that together comprise Proust's masterpiece, A la recherche du temps perdu (trans. In Search of Lost Time). It serves as both an introduction to the entire work and it functions as a novel in itself, consisting of three parts ("Combray," "Swann in Love," and "Place Names - The Name"). "Combray" is a beautifully written meditation on the early childhood memories of the narrator (who at the moment is unnamed, but will eventually be revealed as "Marcel") as he describes his parents, his extended family, the small town of Combray where they lived, and memories of his parents' friend, Charles Swann. "Swann in Love" is primarily a third-person account of Swann in his younger years when he met and fell in love with Odette, a local courtesan who gradually becomes his obsession. Finally, "Place Names - The Name" is a brief conclusion to the entire volume, further delineating the setting while giving the reader a glimpse of the narrator, slightly older now and obsessing in his own way over Gilberte, the beautiful daughter of Charles and Odette Swann. That's it, in a nutshell.

But that summary does no justice to the beauty of the prose, something that escaped me the first time I read the book. Constructed of long, labyrinthian sentences that dip in and out of time periods and narrative consciousness, Proust's prose itself reflects one of the major themes of the novel -- time -- and forces the reader to meander and reconstruct as the narrator drifts from one event to the next, occasionally stopping to show us an epiphany or recount an amusing anecdote or offer a delightful observation about French society or time or memory or love.

What I especially enjoyed, however, was way in which Proust maintains subtle balances of motifs and images throughout the work: Swann's obsession over Odette -- detailed over almost half the book in episodes that are alternately poignant, infuriating, and hilarious -- parallels the obsession young Marcel later develops over Gilberte; flowers of various kinds become a recurring image fraught with symbolic meaning; Marcel and Swann have moments of "awakening" from dreams at different points in the novel, leading the narrator to speculate on memory and how it impacts our perception of time. Like a giant wheel, the narrative cycles gently around to give the reader glimpses of moments, places, objects that continue to develop with meaning as the narrative gently circles once more.

There's SO much more to say about this volume; a simple blog entry is insufficient. Suffice it to say, I thoroughly enjoyed reading Swann's Way and have begun the next volume, Within a Budding Grove.
Posted by Tim Strzechowski at 5:24 PM