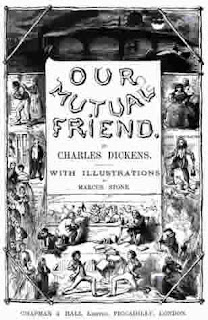 Published in monthly installments over 1864-65, this was the last full-length novel written by Dickens. He hadn't published a monthly since 1857 when he wrote Little Dorrit, so this novel was more difficult to sustain for the aging, ailing writer. Dickens had a tough time getting it started, and few of his contemporary readers found it as engaging as his earlier works. But today it is hailed as the great final flourish of one of the most important Victorian writers.

In typical Dickensian fashion, the plot is too labyrinthian to attempt a coherent summary. Suffice it to say that the novel weaves together three different narrative trajectories that Dickens had been mulling over for several years, one of which being the story of a guy who fakes his own death to circumvent the wishes of a will, another being a couple who wed for each other's money, only to learn that each lied to the other about his/her fortune. With money as the main theme, Dickens explores a wide range of ways in which money is acquired, lost, and used for both good and ill purposes.

Although this was hardly my favorite Dickens novel, it contains a number of cool touches that are reminiscent of his earlier novels. Certain scenes with Silas Wegg remind me of the interactions between David Copperfield and Uriah Heep; chapters with Mr. and Mrs. Veneering echo those with Sir and Lady Dedlock in Bleak House; and so many moments throughout the novel that dwell upon money seem to be cut from the same cloth as Dombey and Son or Little Dorrit, I lost count. One critic has called Our Mutual Friend "the entire Dickens canon redux," and that's actually a pretty good way of describing it.

Thus concludes my reading of Dickens's novels. It's taken me four years, but I've been able to read all sixteen novels during that time (and, with the exceptions of Our Mutual Friend and The Mystery of Edwin Drood, all have been read at least twice). All that remains is the teaching of them as I look into my next personal "project": the complete fictional works of Fyodor Dostoyevsky.
Posted by Tim Strzechowski at 2:26 PM