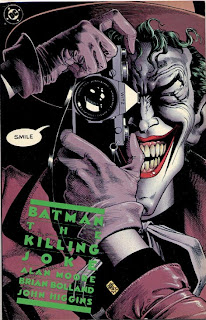 This was a throwaway quickie of a read, done on the heels of having seen The Dark Knight this past Friday. I succumbed to the pre-release buzz surrounding Heath Ledger's performance as the Joker, and having heard that The Killing Joke was one of the sources Ledger drew upon for his portrayal of the arch-villain, I decided to read it.

Batman has always been a superhero close to my heart, especially since I grew up watching the old Adam West Batman TV series (which premiered the year I was born!). Even as a kid, I remember enjoying the playful "Bam!" exclamations and campy dialogue, and noticing how every single villains' lair always had a slanted floor (Did villains' lairs lack solid building foundations? Was Gotham City kinda like San Francisco?). So when the movie franchise began with the 1989 Tim Burton release, I highly anticipated the dark, gothic look Burton would bring to a story I'd always associated with bright colors and well-illuminated interiors.

Heath Ledger's Joker is a fun bad guy, a shimmering combination of criminally insane mastermind and trickster in a weird, nervous junky frame. But I found the Joker in Moore's book a bit of a throwback to the pompadoured Caesar Romero Joker from the TV series ... too giggly and "clownish," if you know what I mean. Of course, Moore's Joker is murderous -- the story centers on how the Joker shoots Barbara Gordon, the commissioner's daughter, in the spine and paralyzes her in an effort to drive Commissioner Gordon insane, thus proving that "All it takes is one bad day to reduce the sanest man alive to lunacy" -- and Moore gives the reader some backstory on the Joker to suggest what might have driven him insane.

But, as all Joker's stories are concerned, this may or may not be what really happened ...

Bolland's artwork is superb, and the coloring is one of the most nuanced I've seen. You'll dig the comic from a purely artistic standpoint, if nothing else.

So if you're following the Hollywood hype this weekend surrounding The Dark Knight, this book is a good supplement to your filmgoing experience.
Posted by Tim Strzechowski at 8:01 AM