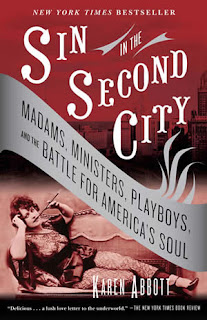 Karen Abbott, Sin in the Second City: Madams, Ministers, Playboys, and the Battle for America's Soul

Back around the turn of the century, Chicago's red light district was affectionately called "the Levee," a section of south Dearborn that was the location for, among other things, the famed Everleigh Club, a high-end brothel run by Minna and Ada Everleigh. Boasting a bevy of beautiful "butterflies" -- as well as perfumed rooms decorated in opulence and a reputation for cleanliness, safety, and sophistication -- the Everleigh Club became world-renowned, a double-edged sword that not only brought millions of dollars to the city's vice district, but also a notoriety that led to the Levee's demise.

Abbott's book recounts the time period beautifully, rewarding the reader with details about this period in Chicago's history while showing how famous names like Al Capone, Jack Johnson, Katherine Hepburn, and Frank Lloyd Wright became part of the tapestry that was the Levee district. Moreover, Abbott explains how the Everleigh Club contributed to the establishment of the Mann Act, the Women's Suffrage movement, and even the formation of what would become the Federal Bureau of Investigation. Similar to Erik Larson's The Devil in the White City, Abbott's book is a readable and fascinating look at this piece of Chicago history, even illustrating how its resonance is still felt today.

If you're like me and enjoy reading about turn-of-the-century Chicago history, definitely check out Sin in the Second City. You won't be disappointed!
Posted by Tim Strzechowski at 5:26 AM