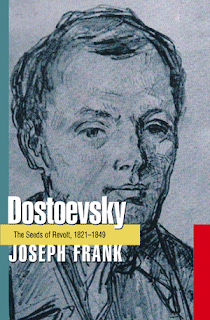 This fall I will conclude my four-year Newberry project involving the complete works of Charles Dickens, and although part of me would like to resume the seminar series all over again, another part of me would like to tackle another author I haven't read much of, but would like to: Feodor Dostoyevsky. I am in the process of gathering his major and minor fiction and, along the way, came across the well-known five-part biography of Dostoyevsky by Joseph Frank. I just finished reading volume one today.

In this volume, Frank focuses on the early years of Dostoyevsky, from his birth up to his arrest in 1849 for his involvement in the Petrashevsky circle. Along the way, significant attention is given to Dostoyevsky's early childhood and family life, his involvement in various literary groups and the socio-political milieu of mid-nineteenth century Russia, and his earliest publications (Poor Folk, The Double, Netotchka Nezvanova, and various short stories of the time period). What I really enjoy about Frank's biographical style, however, is that he doesn't burden the reader with the daily incidentals that occupy his subject's life; instead, he discusses only those people and those incidents that will somehow later inform Dostoyevsky's fiction and his philosophical ideology. Hence, for as comprehensive as volume one is, not a word is wasted!

I would like to read some of this early fiction before I proceed to Volume Two.
Posted by Tim Strzechowski at 3:07 PM