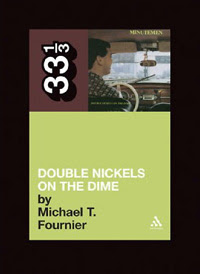 In my younger and more vulnerable years, I was in a band. I played bass, and occasionally drums. We fancied ourselves a band with a punk ethos. In retrospect, we were suburban dorks ... but we had fun. And during this time I accumulated an impressive collection of punk albums. One of my favorites, and the greatest album of all time (in my humble opinion), is Double Nickles on the Dime, a double album released in 1984 by the Minutemen, a punk trio out of San Pedro, California. Containing a vast forty-three songs (few of them exceeding 90 seconds) that span the genres of punk, jazz, funk, flamenco, country, and even avant garde, the album is unlike anything you've ever heard before -- and the band flat-out rocks!

Anyways, this small volume by Fournier is a song-by-song analysis of the album. Fournier draws upon interviews with bassist Mike Watt and countless others who worked with the Minutemen during their brief tenure in the early 'Eighties (before guitarist D. Boon was killed in an automobile accident around Christmas, 1985), weaving together stories of how the songs were sequenced for the album, the various literary and musical influences on the band at that time, and amusing anecdotes associated with the composition and recording of the music. More importantly, Fournier is obviously in love with the music, and the tenderness with which he analyzes the songs' lyrics, arrangements, etc. make this a fun read for anyone who is familiar with this album ... and a wonderful introduction to the Minutemen for those to whom this band remains unknown.

See more of the outstanding 331/3 series published by Continuum.

Visit the Minutemen's archives at Mike Watt's Hoot Page, or check out the Watt from Pedro Show podcasts (where the December 8, 2007 show was devoted to an interview with Fournier).

And a great documentary to check out is We Jam Ecomo: The Story of the Minutemen (2005), directed by Tim Irwin. It includes interview footage and archival concert footage of the Minutemen in action. Righteous stuff!
Posted by Tim Strzechowski at 6:13 PM