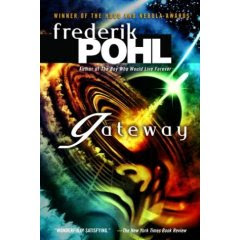 Frederik Pohl, Gateway
As I've mentioned here before, it's always such a pleasant relief to immerse myself in some good ol' science fiction for a bit after spending months reading stuff because I have to, whether it be for school, for the Newberry, or for various other obligations. Gateway is one of those sci-fi books I acquired quite some time ago ... it sat on my shelf for ages, probably alongside A Canticle For Liebowitz ... and now that I've read it, I'm convinced it's one of the better books I've read this year!
Originally published in 1976 and a winner of both the Hugo and the Nebula Awards, Gateway is the story of Robinette Broadhead, a twenty-something young man who spends his days in therapy talking to Sigfrid von Shrink, his artificial intelligence analyst. In the course of Bob's sessions with Sigfrid, we learn that a race of beings called Heechees once populated an asteroid named Gateway, only to mysteriously vanish ... leaving behind hundreds of spacecraft that are pre-programmed to voyage throughout space. The problem is, humans don't know where the ships will go, when they'll return, or how to change the programming ... so all voyages on the Heechee crafts are an immense gamble with one's life -- drawing huge financial rewards for those lucky enough to return alive!
Enter Bob Broadhead, who escapes his lowly existence working in the food mines by winning a lottery, and with his winnings the chance to voyage on these Heechee spacecrafts to prospect for otherworldly riches. A series of such trips leaves him miraculously spared from certain death, and his sessions with Sigfrid reveal his deepest psychological fears, urges, and the profound guilt surrounding his last mission!
Told in chapters that alternate between Bob's therapy sessions and his experiences on Gateway, and sprinkled throughout with glimpses at pop culture from the future (via classified ads, data readouts, spacecraft manifests, letters, interviews, Heechee-related poems, etc.), Pohl's novel is a meditation on social and psychological behavior and the things that make us "human": the need to love, the need to cry, the need to manipulate, and the need to risk everything we know for the thrill of what we don't!
This was a cool book with which to begin my holiday "fun reading." Check it out!
Posted by Tim Strzechowski at 9:42 PM