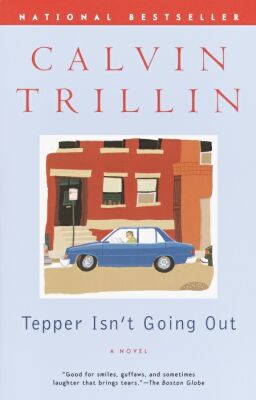 After a hard day at the office, Murray Tepper likes to park his car (always legally) along the streets of Manhattan and read the newspaper quietly. At first, no one other than drivers looking for parking spots (and who are much dismayed by the notion of anyone sitting in a parked car, reading) are bothered by this, but gradually Tepper garners the unsolicited attention of pedestrians who, inspired by this simple act of civil obedience, now crowd the streets in hopes of sitting on his passenger side, seeking advice and enlightenment from Tepper. Eventually the news media, a book agent, and City Hall itself become swept along in what turns into a hilarious legal battle for this Everyman and his right to park and read. And when questioned why he's sitting in his car reading, Tepper's answer is always simple: "There's seven minutes left on the meter."

Tepper Isn't Going Out is an entertaining and quick read. Aside from some mild satire involving city politics, media celebrity, and literary tastes, this is not a book to read for deep meanings ... and that's fine, too. In some respects, the novel does with/for New York City what A Confederacy of Dunces does with/for New Orleans (structurally, both novels are similar), and it made me notice something, albeit hard to describe, about a New York "style" of writing that is reminiscent of authors like J.D. Salinger and E.B. White -- an easy, crisp, and lightly witty prose style that, except for references to laptops and the internet, could have just as easily come from a 1956 issue of The New Yorker.

I'm not crazy about the cover of the book, for whatever that's worth. The pastel colors and Crayola-like drawing perhaps "work" with the prose style I just mentioned, but I don't know. Sometimes when I like a book but dislike its cover, I'll play a game with myself and try to "re-invent" the cover, and in this case a quirky Norman Rockwell Saturday Evening Post-like scene might work better. But again, for whatever that's worth.

This is yet another fun book with which I had the pleasure of starting the summer. I'm on a roll!
Posted by Tim Strzechowski at 6:10 AM