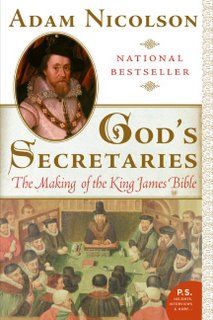 Over the past seventeen years of teaching I've been on countless commttees -- none having ever gone smoothly, mind you -- and it is the mere fact that a committee of fifty-four well-educated but religiously biased and politically savvy individuals can somehow reach consensus on one definitive translation of the Holy Bible that makes the whole idea of consensus within a committee all the more astounding!

Nicolson offers plenty of good stuff here. He provides an interesting portrait of King James I, a walking paradox whose desire to prompt this all-inclusive translation project stems from his own religious biases and immense ego; he details the meticulous and ingenious methods used by the translators to arrive at a text that is at once readable and literary, yet ambiguous and accessible; he weaves within the narrative the "dirty laundry" of many of the key translators, continually reminding the reader of how such a majestic text derived from very human readers; and he affords an abundance of details about the Jacobean era to give one a solid sense of the zeitgeist in which the King James Version was created.

(For me, this book works well with the teaching of Shakespeare and Milton, as well as the early Puritans.)

This was recommended to me by one of the students in my summer Newberry seminar on Milton's Paradise Lost, and is a good book for anyone who wants to see just what goes into the translation of text, especially one rife with religious and political significance. Although I've read numerous books on the writing and translating of the Christian Old and New Testaments (and I'll list a few good recommendations below), God's Secretaries reminded me of just how much political importance was associated with a particular bible translation ... something which I suppose I'd forgotten about.

Rather than its dogma, I prefer the study of biblical text from a literary standpoint -- the stories, the mythologies, and the meanings we, as readers, have historically granted these stories. A few books I've read on the subject, which are quite good (some of which are Pultizer nominees), include:

Charles Panati, Sacred Origins of Profound Things: The Stories Behind the Rites and Rituals of the World's Religions

Karen Armstrong, The Battle for God: A History of Fundamentalism

I also enjoy the works of Elaine Pagels, especially Adam, Eve, and the Serpent, The Origin of Satan, and The Gnostic Gospels

If you (like me) are intrigued by why many human beings seek religion and a belief in a deity of their choice, you may wish to check these out.