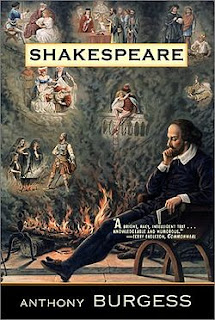 Any biography of William Shakespeare is automatically hobbled by one inconvenient fact: there isn't very much known about the guy. Once you get past the dates of "birth" and death, his formative years in Stratford-upon-Avon, and the approximate order in which he wrote and performed most of his plays, the rest is pure conjecture. So the mark of a truly good biography of Will becomes a question of how the biographer fills in the gaps.

Burgess, himself the author of A Clockwork Orange as well as dozens of additional novels and scholarly works, does an excellent job of filling in the gaps in this well-researched and highly readable biography of the Bard. He handles nicely the placement of Christopher Marlowe and Ben Johnson within the Jacobean milieu in relation to Shakespeare, and he examines convincingly the ways in which historical events -- both social and political -- likely influenced Shakespeare's subject matter as he wrote his sonnets and plays. But what I most appreciated in this was Burgess's control of his style: while some novelists who don the cloak of biographer often let themselves get carried away by their own Muse (I'm talkin' to you, Peter Ackroyd), Burgess seasons his writing with just enough anecdotes, speculation, and wit without overshadowing his subject.

If you read one biography of William shakespeare, this is it. If you are beginning the study of Shakespeare's life and works, start here. This is an excellent read.
Posted by Tim Strzechowski at 9:43 PM

At last, I found your article again. You have few [url=http://tipswift.com]useful tips[/url] for my school project. Now, I won't forget to bookmark it. :)

Interesting! I had no idea that Burgess wrote a bio on the Bard! I am going to have to get it.