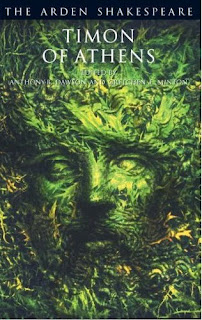 This is the 2009 selection for our "Obscure Shakespeare Play" reading group, which celebrates its sixth year on Saturday. As you know by now, a few former A.P.ers and I started this tradition in an effort to explore the least-read Shakespeare plays, and we generally meet on the first Saturday of the new year for lunch and discussion. This year, we may have a few more folks at the discussion.

According to scholars, Timon of Athens is possibly one of those plays in which Shakespeare collaborated with a fellow playwright, similar to The Two Noble Kinsmen. It tells a story that is simple enough: Timon is generous with his wealth -- too generous -- doling out loans that he cares not to collect on, and lavishing gifts and feasts upon everyone in Athens until he is literally penniless ... and when he tries to collect on the loans or call upon "friends" to help him out financially, he realizes the hard way that suddenly his friends aren't as quick to reciprocate with generosity. Timon is driven to misanthropy, madness, and death.

Certain aspects of the play remind me of the great tragedies. There is the narrative simplicity of Othello with the self-delusion of Macbeth, coupled with the misanthropic invectives of King Lear in its final acts. At the same time, however, there is a noticeably incomplete quality to the story itself, and even some of the lines break off in mid-meter, left unresolved. Nevertheless, in typical Shakespearean fashion there are plenty of motifs to follow (references abound to "gold," "dogs," "prostitution," and "use" to correspond to the themes of philanthropy and feasting off of others' offerings), and the banquet scenes anchor the symbolism of the story in much the same way the scaffold scenes do in Hawthorne's The Scarlet Letter.

Although it is rarely performed, I did learn of a musical score for a production of Timon of Athens that was composed by Duke Ellington, which is kind of intriguing to me.

As far as Shakespeare goes, Timon of Athens is pretty good ... even if few people read it any more.
Posted by Tim Strzechowski at 6:46 PM