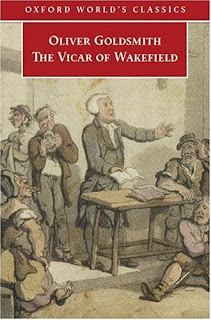 Oliver Goldsmith, The Vicar of Wakefield

Having spent the last four years reading Dickens novels, criticism, and scholarship, I find myself somewhat fascinated by the books that would have made up young Dickens's readings prior to his going into that blacking factory at the age of twelve. As a young boy of gifted intelligence, Charles Dickens was exposed to a number of works popular at the time -- Henry Fielding's The History of Tom Jones, A Foundling; Daniel Defoe's Robinson Crusoe; Tobias Smollett's The Adventures of Roderick Random; and Oliver Goldsmith's The Vicar of Wakefield -- and I would like to read (and see) just what influence it had on Dickens's writing.

Written from the POV of the titular vicar, the novel is actually pretty funny in its depiction of a henpecked husband and harried father as he weathers the storms of existence. If there is a Dickens connection to be made here, the most obvious one is not only the tone of the comedy but also the picaresque hardships suffered by the Job-like Dr. Primrose, the vicar.

But while the first half of the novel seems to showcase the amiability of the vicar despite his personal and professional calamities, the second half of the novel presents a Swiftian tone to the satire. It's an interesting development in the course of a relatively short book (my Oxford World's Classics edition is only about 165 pgs.), and what Dickens accomplishes in tonal development over the course of sixteen novels, Goldsmith conveys in less than 170 pages.

The Vicar of Wakefield is a quick, painless read ... and it gives you a glimpse of the some of Dickens's most cherished stylistic devices.
Posted by Tim Strzechowski at 12:05 AM