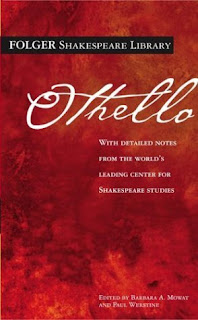 This was a re-read for me. I first read it back in college, and I seem to recall even writing a paper about it ... in heroic couplets, no less. Then I read it at the end of this past school year (in May), and now just re-read it. In my A.P. English class, I'm trying to swap out King Lear, which has been a standard of my summer reading assignment, and figured Othello is a logical alternative.

Considering that Othello is held as one of Shakespeare's "four great tragedies," I was immediately struck by how ... well ... earthly it is. While Hamlet, King Lear, and Macbeth all address very cosmic connections between man's physicality and his spirituality, Othello is surprisingly fleshly. Now, that doesn't make it any less powerful of a play ... but I find that aspect of it interesting, considering the company it keeps.

Iago is, of course, a deliciously evil character, and I look forward to exploring the connections between Iago and Milton's Satan with my students this semester. There are some wonderfully manipulative conversations that take place with both characters, and I suspect such a comparison will make for fruitful analysis. Desdemona evokes a certain eroticism that is not conveyed in the other three "greats," and Othello himself is a bit of a dupe ... not quite the dupe Macbeth is, but that's a different story altogether.