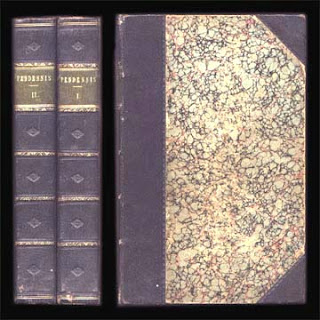 My reading lately hasn't been terribly engaging. In school, I've been in the process of re-reading several books that I've either read before (The Island of the Blue Dolphins, A Tale of Two Cities, and Great Expectations) or taught before (A Portrait of the Artist as a Young Man, White Noise), and I've found myself more often than not simply gathering books to read in the upcoming months as school begins to wind down.

One of the choice acquisitions I've made in the past few weeks is a first edition of Thackeray's The History of Pendennis, originally published in 1850 by Bradbury & Evans (Dickens's long-time publisher). I scored a copy of this two-volume set, in very good condition, for a mere $14.00 thru Powell's Books on Portland, Oregon. The novel is often compared with Dickens's David Copperfield as a prime example of the Victorian-era bildungsroman, and I've wanted to read the novel since encountering references to it last year in my Dickens research. Since the novel is currently out-of-print, I did some online hunting, stumbled onto this edition ... and bought it -- which is officially the oldest book I own!

I hope to begin reading it as my work load lessens over the next month.
Posted by Tim Strzechowski at 8:32 PM