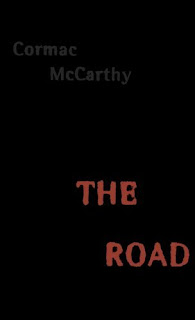 Cormac McCarthy, The Road
Simply put: haunting and gut-wrenching.
A man and his young son traverse the ashen wastelands of what was once America. Nuclear holocaust has devastated everything save a few roads and the occasional farm or abandoned city, and the two nameless protagonists move relentlessly westward in the hopes of reaching the ocean coast, all the while scavanging for food and shelter, or avoiding cannibalistic marauders.
Unlike McCarthy's masterpiece, Blood Meridian, there is no cast of colorful characters, no gruesome episodes of seemingly senseless violence, and no satanic Judge Holden from which to ascertain a moral (?) center. The Road is richly poetic despite its simplicity of style, and the "adventures" (such as they are) show a noticeable depth of character in both man and son as the narrative progresses. And while this is hardly the "feel good" book of the year, it remains surprisingly hopeful in the face of all that you, as a reader, suspect will happen by novel's end.
It took me about one full day to read this novel. It will grip you firmly about the neck during the reading, and linger with you long afterwards ...
Most powerful thing I've read so far in 2007, quite frankly! Check it out.

Posted by Tim Strzechowski at 9:27 PM