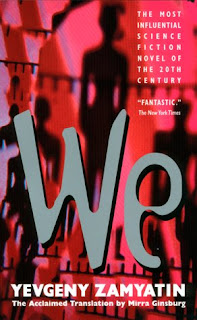 This was recommended to me a few months back by a colleague. I scored a copy over the holidays and just finished it.
Published in 1920 (but suppressed for over sixty years in Russia), here is the Ol' Granddaddy of Twentieth Century dystopian literature. We is the first-person account of D-503, builder of the aeroship Integral in the futuristic One State controlled by the Benefactor. In the One State, all human emotion and imagination have been suppressed, and all thoughts and efforts are aimed at forcing the individual to act for the betterment of the collective. Everything from romantic encounters to elections are highly controlled and monitored, and D-503's aeroship will soon embark on its sole mission: to "subjugate the unknown beings on other planets, who may still be living in the primitive condition of freedom, to the beneficient yoke of freedom [...] and to compel them to be happy."
Everything is going smoothly for D-503 until he meets I-330, a beautiful young woman who inspires his imagination, awakens his passions, and introduces him to that most irrational of human possessions -- the Soul.
Long suppressed because of its commentary on Stalinism, We offers revolutionary ideas that even in today's political milieu might seem somewhat inciting. Nevertheless, it's pretty easy to see how this novel offered a template for Orwell's 1984, and it is said that it likewise inspired Huxley's Brave New World (which I haven't read since my own sophomore year of high school) and Ayn Rand's Anthem (and, having once read The Fountainhead, will likely remain the only Rand novel I read). We is a good read, and the final half of the novel is pretty riveting! Do check it out.