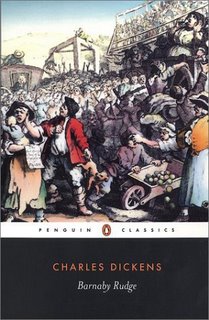 It feels like it has taken me almost a year to read this book. In truth, it's taken me since late-September to get through this thing, for various reasons. But part of the blame must rest with the book itself which, for as much as I love Dickens's work, is rough going.

In a nutshell, Dickens's fifth novel is the story behind the anti-Catholic Gordon Riots of 1780, a sprawling week-long uprising that devastated portions of London and its neighboring countryside and led to a conflagration that destroyed most of the then newly built Newgate Prison. While it's considered a historical novel in the same way A Tale of Two Cities is "historical," Dickens focuses on mostly a variety of fictional characters who populate the tale, making this a work of historical fiction.

To be honest, the first half of the book is woefully dull and unhumorous, completely unlike any other Boz novel in that regard, and you read three hundred pages and it feels like a thousand because, try as you might, there are few characters you can grasp onto and enjoy -- even in their villainy. But the second half of the novel? It moves like gangbusters, and suddenly the reader is thrust into the heat of the riots, some humorous exchanges take place, a public execution is described beautifully (Dickens waxes poetic when it comes to blood and gore!), and you begin to care about the characters (as well as see how all that initial 300-page meanering falls into place!).

One Dickens scholar described this novel as akin to the "problem plays" of Shakespeare, which I can see. The character of Barnaby himself is an "idiot" (much like Faulkner's Benjy Compson) who occupies very little narrative space, all things considered. And while there are scattered examples of the stylistic flourishes Dickens will perfect in subsequent novels, the overall writing lacks that certain "flair" of excitement he invests in his other works. I suspect this is partly due to the circumstances under which this particular novel was written (i.e., it was planned a few years earlier to be his second novel, but became the reason for a battle with his publishers that, once settled, probably left Dickens with a bitter taste in his mouth anyways).

I recommend this book, but only to the die-hard Dickensians.
Posted by Tim Strzechowski at 9:01 PM